Cin Cin Western Road General Manager, James Thomson, was recently tasked with revamping our Italian wine list. In this blog, he explains how he spent the past few months creating a diverse list with something for everyone’s tastes and preferences.

Over the last few months I have travelled the length and breadth of Italy – tasting, comparing & studying the grapes, geography and production methods of Italian wines. At least it feels that way. Most of this has however been conducted in the slightly less-glamorous but decidedly more cost-effective comfort of the Cin Cin Western Road dining room.

I joined Cin Cin in January this year after 5 years at Gingerman Restaurants, where I was responsible for (among other things) the group’s wine list. Revamping the wine list was my first assigned project upon joining Cin Cin, and one I was very excited about. My work on this began as soon as I knew I was coming to work for Cin Cin through the form of self-education – my home drinking became a very regional affair, working my way from north to south and grape to grape. I knew the classics, I knew I leaned towards wines from the North; Nebbiolo & Pinot Bianco have long been go-to grapes for me. I knew that I enjoyed some of the indigenous varieties from Sicily, but there was this huge bit of land in between that I had never really explored. The task was a daunting one as for the first time I had the limitations of borders. The most difficult decisions previously would have been having to omit an incredible wine from a list because there were already 4 or 5 from a similar style or country already on there. Now though, the hardest challenge would be trying to provide enough range of flavour at different price ranges.

The goal from the start was to ensure that a guest should be able to find exactly the style they like to drink from within our list, despite it being all Italian. To achieve that, I was going to need some help.

Before I met with any potential supplier, I needed to decide on how I wanted to present the list. Wine lists can be a minefield at the best of times, but none more so than single origin lists. So many words and places no-one has ever really heard of. It would often go like “is that the grape or the town?” – “Oh, neither, that’s the producer.”

I decided to list by geography, splitting the country into four sections: north, central, south and island. The styles of wines could be best grouped this way for the customer. Someone comes in and wants a big, fruity red, we can point to the Southern reds and say anything from here. For tight, fresh whites, stay in the north. What this also does is showcase something else you might like from a similar part of the region. For example, we list a Gavi that isn’t available by the glass, but the most similar alternative is probably in the same region.

Then it was time for trade tastings. One of the first potential suppliers to drop his head in was Joe Wadhams of Hallgarten Novum wines. He got VERY excited about this project and its regional direction and immediately showed interest in supplying us. An invite to a trade tasting and some detailed notes paired with a potential listing and the wheels were turning. Trade tastings are hard work. I’m serious. A huge room full of wine may sound incredible but believe me it’s hard work to get what you want out of it. Each producer wants you to try their full range and your palate can only take so much. These tend to kick off early, so after a few rounds you’re already a bit wobbly and the notes you made at the start become less articulate. You’re unlikely to remember a lot. But Joe was there to hold our hands and give it some focus. The outcome was a concise list of wines that really impressed, at various price points and the spine of our list was born.

For some Sicilian gold I had Toby at Enotria to thank for a full and thorough tasting of the Planeta range. Some interesting indigenous grapes with truly unique geography.

From there it was about adding flourishes and points of interest. Some old and rare wines came with the help of Rob ‘The Boozer’ Maynard at Butlers Wine Cellar (who works Wednesday evenings here as a rule should anyone wish to come down and pick his brains). This is the top shelf stuff – Barbarescos & Super-Tuscans.

Then came the natural wines. Undefined but much talked about of late, (future blog about these to follow) orange/low sulphur/minimal intervention/skin contact was the area I knew least about but was interested to explore. In stepped Line from Caves de Pyrene to enlighten me and identify the gaps we had on the list and what I expected to be a real struggle of a tasting session turned out to be one of my most eye-opening to date. Some are more out there as expected, skin contact whites and heavily oxidised reds which can be more of a learn to love experience while others would slip straight into a more ‘traditional’ list without any introduction required.

So, this process began in January and by early-May I would say it reached the stage where I was happy to call it complete. For now. And that’s the best part of it really – it’s never complete. There is always the next tasting – and the difficult decision of having to remove something from a list that you like to fit one in you like even more.

But back to that goal – achieving an all-Italian wine list (sparkling, still & sweet) which covers a full flavour profile and tapped into all the wine-producing parts of the country.

We have a regularly changing by the glass and carafe list. We treat wines as seasonally as chef treats his dishes and will always look to have the perfect match for your dish available by the glass.

What we would love to see more of is customers asking us more about wine, not to be intimidated by it. Don’t just go for the one you’ve heard of, I bet we can find you something better and give you a new favourite. 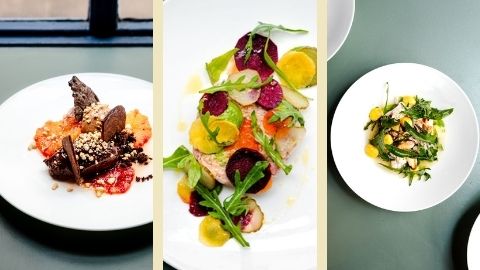