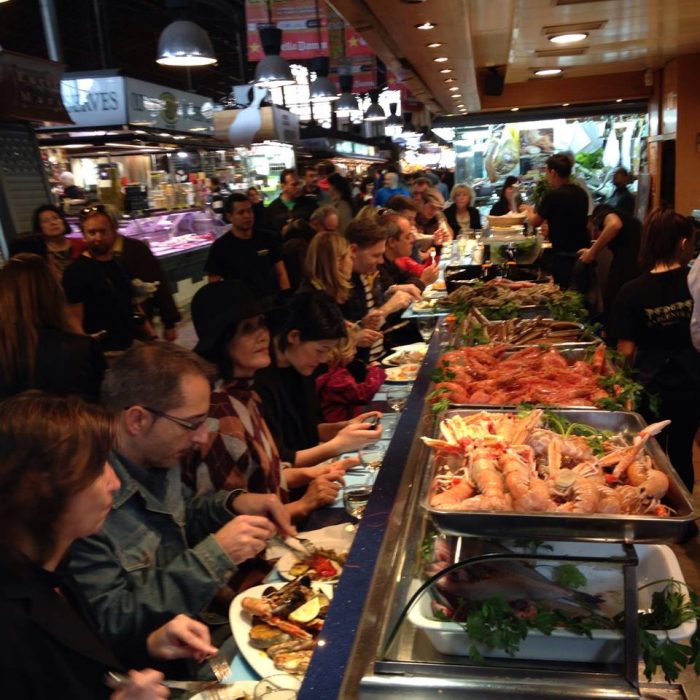 I was really looking forward to this city break, almost as much as Libby whose enthusiasm was raised by the fact she had not been there before.  I generally prefer to go with flow when I’m travelling, armed with nothing beyond a skeleton outline of places to see and eat rather than having a regimented list to hit.

Unfortunately with Barca, you need to make that little extra effort.  In London, everything is open 7 days a week and we are blessed with a range of cuisines and styles of restaurant that can only be matched by NYC.  But in Barca, it’s pretty much luck of the draw whether the destinations on your list will be open or not so if possible, book ahead.

Here are the places we managed to visit:

Vaso de Oro – this traditional ‘cerveceria’ or beer bar in Barcelonetta is a must visit.  Black and white tiled floor, one long bar with a glass counter top displaying the daily dishes, stools and small tall tables at each end of its slim room – it was very busy and no doubt that is how they like it.  The waiters are boisterous and decked out in traditional white jackets with gold shoulder lapels but they clearly love their work and the metronomic pouring of beers from the pumps is something I could watch all day.  We ate Russian salad of tuna, egg and cheese; croquetas, boquerones (pickled white anchovies) as well as chorizo and meat skewers with roasted peppers.  I wish I had gone back for the escabeche of poached tuna.  Next time.  30 euros for two including 2 beers.

Can Santi –a lovely little Barcelonetta cantina for a beer pit-stop in the sunshine before you head back into town or if you have just come off the beach.

La Boqueria market – this covered market of fresh produce, just off Las Ramblas, is incredibly addictive.  I know it is probably a relatively touristic market given its position but every stall is bursting with colour and sound, stacked high with ripe fruit, ruby red meats including all manner of offal and a huge range of Mediterranean fish.  Why have covered markets died out in Britain?  Answers on a postcard please.  I know Brighton is at least trying to bring back the Open Market on London Road.  I hope it takes off as there is a real need to reconnect with our producers and farmers.  Even better than the fresh produce though, is the food available to eat there on site!  Little tapas stalls where you wait for space at the counter, pull up your stool and eat dishes which have been made using whatever is available in the market.  We had a fantastic grilled seafood lunch of hake fillets, calamari with fried potatoes and six lovely, big grilled prawns all smothered in garlic butter – finger licking good.  That meal was 50 euros for two with 2 beers.

Bar Mut – this was a highlight as far as food goes.  Recommended by @frankpromotion we were very lucky to get a table on Saturday night and were happy to share one with a couple of local guys.  The décor is all marble top counters and high stools, dark wood panels and large glass cases with plenty of wine on display.  I especially loved the way the fridge was panelled in wood to look like a 1930s ice box. Or was it original?  Service was again enthusiastic and our waiter explained that their menu changes daily and their speciality is the range of fresh seafood available on the grill.  We went for four huge scallops on the grill, served with a white wine and cream sauce which were delicious, as well octopus served in a small terracotta pot which was good but I would have preferred it to have more bite and charcoal to it.  The spinach salad with figs and pine nuts was made great by the surprise of melted cheese in the bottom of the plate, adding a stringy end to the dish.  We took a punt on the bison meatballs served in a rosemary stew and were rewarded with a strong taste of game.  Dessert of chocolate Coulant with pistachio gelato was bloody good, as was the Albarino we had by the glass.  100 euros for two with 4 glasses of wine and worth every cent.

Cornelia & Co – with a strapline of ‘The Daily Picnic Shop’, I was glad they were open on Sunday when much of Barcelona shuts down.  Situated in upmarket Eixample, its clientele are well to do locals who come to this café/deli for brunch, lunch or to pick up high quality cheeses, baked goods and take home meals.  The layout what I imagine to be very Californian – high exposed ceilings, long counters of glass and black steel, shelves of those hard to find foodie items and homewares.  And they have a cheese room! Massive respect.  Their croquetas were the best we had in Barca, light and rich with the woody taste of mushrooms.  The cigala (langoustine) tempura with black sesame dipping sauce was crunchy and light, and their boquerones with shaved asparagus was another super starter.  Unfortunately service went a bit awry.  I ordered a paella of roasted artichokes with squid ink as a main and when that delayed Libby’s salad of mixed leaves with walnut and goats cheese, they were apologetic but the wait just went on and on…to the point that when it came time for us to order our dessert, our waitress obviously finished her shift as she walked out of the restaurant and left us trying to catch someone else’s eye to order.  Poor form.  We skipped dessert and the bill was 60 euros for two, no wine. Probably a bit rich for what it was.

Kiosko – yes I went to a burger bar in Barcelona.  But it’s quite a good burger bar and it easy to get lured in after a few cervezas!  Of course I ordered the Australiana which came with grilled beetroot and homemade barbeque sauce. It was a bloody beaut!  Libby had the Asturiana with blue cheese and carmelised onions.  Bueno but greasy.  24 euros for two burgers and two beers.

And the places I wanted to visit but were closed – Cal Pep, Tapas 24, Tickets, Con Gracia, El 4Gats, Miramelindo … there’s another weekend visit right there!